Nothing but good art 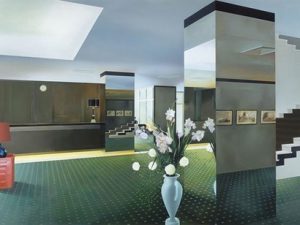 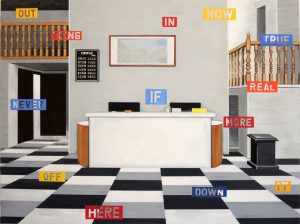 Nothing but good art – blog

‘Lobby’ is a painting by Richard Hamilton that shows the foyer of a hotel, with floors covered with greenish carpet, a large vase of flowers in the forefront, mirroring walls and a free-standing mirror-faced rectangular column in the middle of the room; stairs leading upward.  The source for the painting was a postcard of a Hotel Europa in Berlin that the painter received from a friend round 1974. The painting is fascinating because it is very difficult to actually read the space. The space is empty, however there is a person visible in the back of the scene, but only as a suggested reflection of another space. The pictorial sense of the work being very retinal and illusionary. In 1993 to my surprise at visiting the Venice Biennal exhibition of Hamilton in the British pavillion the painting appeared to be a central object in an installation-like setting similar to the imaginary space of the painting, thus in a hallucinatory way connecting painterly space to real presence.

Laid-back designed interiors often appeared in my work for a long time, often referring to historic spaces in Berlin or former Eastern Germany. In 2014 working as artist-in-residence in Pilotenküche in Leipzig I made my own version of ‘Lobby’, based on the entrance room of a Berlin based Hotel Europa of which I found photographs on the internet. During a visit to China in 2018 I have spent one night at a hotel in a village in the region of Fujian. The hotel entry appeared to have remarkable similarities to the atmosphere and space in the works mentioned above here.
‘Chinese Lobby’ is a recent work shown at my exhibition ‘Labyrinth’ at Gallery Helder (The Hague, NL, Nov. 2019), based on photographs taken of this hotel lobby in Fujian.
Ton Kraayeveld, 2020