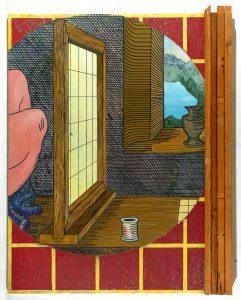 In 1527 Albrecht Dürer made a woodcut in which he sets out his method of reproducing reality. We see the artist (probably Dürer himself) at work in his studio. Lying before him on the table a naked model. Between him and the model a so-called net frame, a window upon which a grid is applied, divided into thirty squares. On the table a sheet of paper with the same grid, as yet with no further line applied. The artist’s hand at the ready with a drawing pen. Two large windows with a view of pastoral landscape. Finally the artist himself, who with his eye behind the drawing needle, an obelisk-like object meant to concentrate the eye on a fixed point, observes the model before him.

Entering Dürer’s windowed studio through the gateway which frames my painting. Looking over Dürer’s shoulder. See how he traces lines in the woodblocks for his woodcuts, how he applies the thin contour line onto his paintings, so painting mixed with drawing. See illusion become reality. Watch how he looks at things, how he explores the woman’s forms with his eyes and everywhere around him frameworks, laths, objects and attributes, aids for the observation and knowledge of the reality.
Permanent metamorphosis. Images stand for values and conceptions, change again into other images. Just as bread and wine transform into flesh and blood in the wonder of transsubstantiation, or spirit to body, or art to life and again the reverse. What first seems immaterial becomes actually present until it returns again to the essence of paint on canvas. Images cannot be owned (that at most the paint and canvas) but are a question of surrender, or to quote Nietzsche, a little intoxication, a little madness. The susceptibility I have for this and I suspect others have it too, is an important motive for my work.